Origami in the microcosm: how to clamp genes

One of the big biological questions is how genes in human cells are decoded with high precision. Tiny molecular machines, so-called RNA polymerases, which translate our genes into RNA molecules, play a key role. The RNA is then used to generate vital enzymes. The reading process by the RNA polymerases is called transcription. Depending on the gene type, the translation of the DNA is carried out by RNA polymerases of type I, II or III. This poses a major challenge for the cell: How does the respective RNA polymerase recognize which of the approximately 25,000 genes it should read? This problem is solved by transcription factors that recognize the starting point of a subclass of genes and direct the RNA polymerase to this starting point. In addition, the DNA in the cell is under tension as it is not present as a linear thread in our cell nuclei, but rather wound up like a fishing line on a fishing rod. This leads to mechanical tension in the DNA. Up to now, it has not been possible to quantify how transcription factors react to these tiny forces, as there was no suitable method.

An interdisciplinary team consisting of physicist Prof. Tim Liedl, physicochemist Prof. Philip Tinnefeld and biologist Prof. Dina Grohmann from the University of Regensburg has developed a method that can be used to apply constant forces on a single DNA molecule and study its reaction to the applied force at the same time. The LMU researchers, who also belong to the SFB 1032, used the DNA origami technique to create nanometer-sized, molecular force clamps from many artificial DNA strands. The molecular force clamps contain a DNA sequence simulating the gene start, to which the transcription factors of interest bind. By adjusting the length of the single stranded DNA the scientists tune the entropic force acting on the model sequence. "The single stranded DNA gets slightly stretched when the origami structure assembles. It acts like a spring", explains Philip Tinnefeld. In this way, unimaginably small forces between 0 and 15 pico-Newtons are exerted, that is trillionths of Newtons. In this way, the situation in the cell was simulated and it was tested whether the initiation factors can still carry out their task correctly when smallest forces inside the cell pull on the DNA. Coupled with a highly sensitive fluorescence-based measurement method, the so-called Förster resonance energy transfer (FRET), hundreds of individual molecules were measured to determine whether the initiation factors cause smallest curvatures in the DNA due to their binding. "It is interesting that not all molecules react equally to the tension in the DNA," says Kevin Kramm, who carried out measurements as PhD student.

In collaboration with researchers from the Institute of Cancer Research (London) and the University of Bristol, the team demonstrated that the specialized class III RNA polymerases require the additional transcription initiation factor Bdp1 to ensure that the recognition of the gene starting point is reliable and precise, even at high tensions in the DNA. The initiation factors only surround the DNA double strand in the presence of Bdp1 and ensure that the RNA polymerase generates urgently needed short RNAs in large numbers. "Our data explain why evolution "came up” with this factor that the other RNA polymerase types do not need", concludes Grohmann. 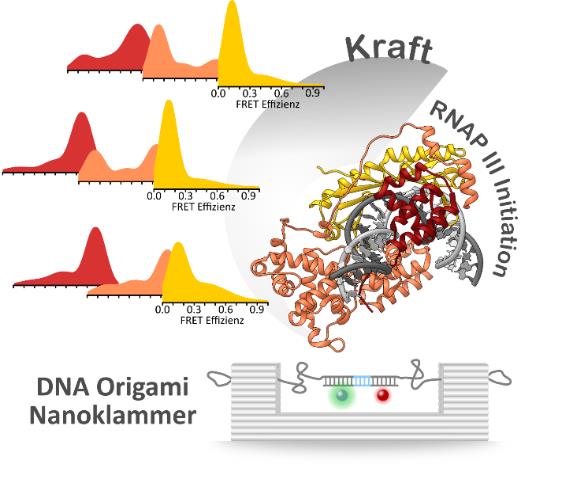